We have created a program that will drive the robot forward for a short distance, but we have placed our code directly in our teleopInit() and teleopPeriodic() functions. While this works for simple programs like this, you will find as your program gets more complex, doing it this way is not ideal.

What we want to do is create separate pieces of code, each of which can handle specific tasks, and then control when those pieces of code get executed. Fortunately a mechanism to accomplish this exists.

We can organize our code into Commands and then specify exactly when each command will be executed. So let’s change our drive program to take advantage of this.

Let’s take a look at what we have here.

First we have the constructor DriveForTimeCommand(). It is here that we will specify which Subsystems this command will require. We do this by calling the requires(…) function with the needed subsystems. It is important that we do this because this is how the command system keeps track of which commands need which subsystems and makes sure that only one command at a time has access to a particular subsystem.

Since this command will be using the DriveSubsystem we change our DriverForTimeCommand() constructor to reflect this.

Note that in order to access Robot.m_driveSubsystem we will need to import our Robot class. When you do this, make sure you do not choose our Robot class, not the Java one: 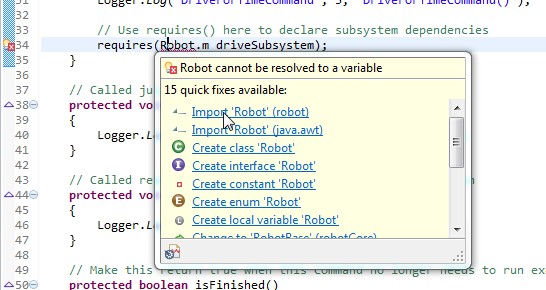 Of course we must also declare and initialize the variable m_timer at the top of our class. Remember to import the Timer class and be sure to use the one from robotCore as opposed to the others offered.

The next function in our class, execute(), is called repeatedly as long as this command is running. Since we are simply going to continue driving until the timer expires, we don’t need to do anything special here.

Now we need to find a place to cause this command to execute. We will do this in the teleopInit() function of our Robot class. First we remove the lines to set the power and reset the time (since this will be done by our new command) and replace them with a line that will create a new DriveForTimeCommand and start it running:

Since we are now handling the driving via this command, we want to remove the remaining references to the timer and m_driveSubsystem.SetPower(…). After you have done this, your Robot.java file should look like:

Now deploy and run your program. When you enable the robot in Teleop mode, it should, once again, drive forward for two seconds.

Before we move on, let’s try and make this command more useful. Right now it is always driving the robot at half speed, and always for 2 seconds. We would like to change this command so that we can control both the time and the speed.

Now in our initialize() function we need to run the robot at the specified m_power:

Finally, we need to change our isFinished() function to use the specified m_time:

You will no notice that your Robot class now has an error on the line where we create an instance of DriveForTimeCommand. Hovering over the error marker it tells us:

The reason it is telling us this is that there is no longer a constructor for this class that takes no arguments (remember that we changed the constructor). So what we must do is provide the proper arguments for the new constructor. Lets have our robot drive forward at 0.75 power for 3 seconds:

Now deploy and run your program that the robot not drives at three quarters power for three seconds.

You might notice that your robot is not driving quite straight but don’t worry, we will address this issue later.