The next thing we want to do is to get our robot driving. To do this we will create a Subsystem. Subsystems are designed to control some aspect of the robot, in this case the drive motors. We are going to need to be able to control the motors using a number of different processes and the advantage of using a Subsystem is that it will enable us to control which process has access to the drive motors at what times. 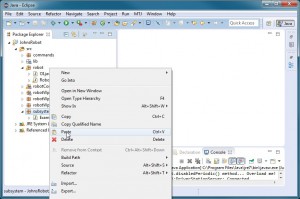 Then enter DriverSubsystem as the name for the new subsystem class:

This should add a new file DriveSubsystem.java to your project under the subsystem folder.

Let’s take a look at what we have. The first function initDefaultCommand will allow us to specify a command to run when no other process requires the subsystem. For now, we are not using commands, so we will not do anything here.

So what resources are we going to need? We are going to want to control the left and right motors so we will need some variable to do that. The yellow motors attached to our robot require the PWMMotor class for control. The first thing we must do, then, is to create the variable that will be used to control these motors. Add the following two lines to the top of your DriveSubsystem class:

When we do this Eclipse will show those lines as having errors. If we hover the mouse over the little error marker for the line, it will show us the error:

It is telling us ‘PWMMotor cannot be resolved to a type’. This is because we need to import the package which defines this class. Fortunately, Eclipse has a nice little feature where it can suggest solutions to errors. If we click on the litter error marker we will see options on how to fix it:

Here we are presented with a number of options, but we will select the first by double clicking on the ‘Import ‘PWMMotor’ (robotCore)’ option. This should fix the errors, however it will still be showing warning markers. Hovering over the warning marker we will find that it is complaining that the variable is not being used. We will fix that in a moment.

Looking at the documentation for PWMMotor we see the constructor requires 2 integers, a pwmPin and a dirPin. The first pin will control the power of the motor and the second will control the direction. We use a Arduino to provide these signals. For an Arduino, only some of the pins can be configured for PWM (Pulse Width Modulation) output. We will be using the PWM pin 5 for the right motor and PWM pin 6 for the left motor. To control the direction, we will be using pin 4 for the right motor and pin 7 for the left. Given this, we can initialize our motor variables as follows:

Note that rather than explicitly using the pin numbers in the constructors we are using constants which we will define by adding the following lines to the top of the DriveSubsystem class.

Although doing it this way involves more typing, it is a good habit to get into. It allows us to group together the important constants that control our robot in one place where they will be easy to find and change if needed.

Now that we have defined and initialized the variables that control the motors we need to provide a function that will allow users of this class the ability to set the power on the motors. We will create a function called SetPower which will allow us to set the power of the left and right motors. Once again consulting the documentation for PWMMotor we find that we can set the power on an individual motor by calling it’s set(double power) function. This function takes a single parameter which specifies the power and can range from -1.0 for full reverse to +1.0 for full forward. Given this we will define our SetPower function as follows.

Let’s now add code to the teleopInit() function of our Robot class to use the DriveSubsystem to drive the robot forward at half power.

The first thing we must do is to declare a variable that will let us access the DriveSubsystem by adding the following line at the top of our Robot class. Remember when you do this to import the DriveSubstem class.

Finally in our teleopInit() function we want to turn the motors on at half power. We can do this by adding the following line to that function:

Before we run our program we need to think a little bit about what will happen. Right now we will turn the motors on when you use the Driver Station to enable the robot when it is in the Teleop mode. Note, however, that nowhere do we turn the motors off. This means that as long as the robot is enabled, it will continue to drive. Hence when we run this program we must be ready to disable the robot in order to make it stop.

Now deploy and run your program and see if it works.

Having the robot run forever is really not that useful, we would really rather have it stop at some point. We will now change our program so that the robot will drive for 2 seconds and then stop. To do this, we will need a timer. Declare and initialize a Timer variable at the top of your Robot class. You will need to import the Timer class. Make sure that it is the Timer class from robotCore not one of the Java timer classes.

Now in our teleopInit() functions we are turning the motors on, but we also need to reset the timer by adding the following line:

Finally, in our teleopPeriodic() function we need to check if the elapsed time exceeds 2 seconds and, if so, turn the motors off:

Now deploy and run your program. When you enable the robot from the Driver Station it should now only drive for 2 seconds and then stop automatically.